Things to Do in Barcelona in the Winter Season

Barcelona is world-famous for its blissfully sunny climate and sprawling city sands, but the fiesta doesn’t stop just because winter arrives.

In fact, with average temperatures of around 16 °C (61 °F) during the day and 10 °C (50 °F) at night, even the beaches are still full of life through the milder months – nudists and all! And as the locals will agree, this Mediterranean marvel is even more beautiful without the thronging crowds of summer. What’s more, winter brings tons of quirky Catalan traditions and foods to discover, making it every bit as fun and delicious as the summer season.

So here you have it, from must-visit landmarks to traditional Christmas foods and traditions, these are the 10 best things to do during winter in beautiful Barcelona.

With fewer visitors and shorter lines, winter is arguably the very best time of year to see Barcelona’s word-famous landmarks. From Gaudi’s colourful Park Güell and modernist marvels (don’t miss La Pedrera and Casa Batlló) to the historic streets of the Gothic Quarter, you can do it all in style (and comfort) during the winter season.

Tip: Be sure to pay a visit to the fascinating Picasso Museum, as well as the MNAC (National Museum of Catalan Art), Fundació Joan Miró and Fundació Antoni Tàpies to delve into local Catalan masterpieces.

Ice skating? In Barcelona? Yes, really! Every winter, the local council erects a huge ice rink in Plaça de Catalunya, which is the physical and cultural heart of Barcelona. It’s a lot of fun for kids and grown ups alike and there’s something truly magical about gliding over ice in this Mediterranean metropolis.

3. Warm Up with Catalan Escudella

One of the best things about winter in Barcelona is indulging in hearty escudella de carn d’olla, a traditional Catalan stew made with hunks of meat, seasonal vegetables and giant pasta shells called ‘galets’. Pair with a peppery local vino for the ultimate winter warming feast!

Tip: Join one of our fun food-packed tours and we’ll make sure you enjoy the most authentic Catalan dishes in Barcelona this winter!

4. Grab Yourself a ‘Ganga’ in the Winter Sales

Barcelona is a dream for shopaholics! You’ll find everything from little antique stores and ateliers to big brand boutiques and department stores. The best time to go shopping in Barcelona is from January through March, when prices are slashed for the epic winter sales.

Tip: It’s not difficult to find Barcelona’s many shopping streets, but definitely don’t miss Portal del Angel. Running parallel with Las Ramblas, this is one of the busiest streets in Europe and one of Barcelona’s most stylish shopping streets. For smaller vintage fashion stores and indie boutiques, head to the neighbourhoods of Raval, Born and Gracia.

The Catalans celebrate their cultural festivities with great fervour and really go all-out during the Christmas season. Located in the square in front of Barcelona Cathedral, right in the heart of the city, the Fira de Santa Llucia Christmas market is home to over 50 stalls selling all sorts of colourful arts and crafts. The market has been held for some 230 years and is a great place to pick up a few quirky Catalan trinkets (some rather bizarre examples await you below). Another classic Christmas market in Barcelona is the Fira de Nadal a la Sagrada Familia, which is located (you guessed it!) in the shadow of Gaudi’s emblematic Sagrada Familia.

For a souvenir you won’t forget in a hurry, buy yourself a traditional Catalan ‘caganer’ (literally ‘pooper’). These bizarre little figurines depict a Catalan peasant squatting down and… well, taking care of his business. The Catalans place their caganer in their Christmas nativity scenes and believe he brings good luck for the following year (by fertilizing the ground). No joke!

You may also notice that the Catalans have their own version of Santa Claus, a Christmas character called ‘caga tió’ (literally ‘pooping tree trunk’). Children feed their smiley little tree trunk orange peel and turrón in the run up to Christmas to fatten him up. Then, on Christmas Eve or Christmas Day, they beat him with a stick and command him to ‘poop Christmas presents’. When they lift up the little blanket that keeps him warm, voila, there are the presents!

Tip: You will find caganers and caga tiós at all of the Christmas market stalls in Barcelona, so now you know what to buy this year for that person who has everything!

The Spanish actually make more of a fuss over Three Kings Day (January 6th) than they do over Christmas Day. This is when families get together to exchange gifts, feast and fiesta. The highlight is the much-anticipated Three Kings Parade, which snakes its way through the city on the night of the 5th. Whether you’re travelling with children or not, head to Avenida del Marquès de l’Argentera, where the Three Kings begin their tour at around 6pm, and follow them to their final destination near the Magic Fountain in Montjuïc.

Tip: Give the Kings a smile and a wave and they may just throw you and handful of ‘caramelos’ (sweets)!

In February, as Barcelona’s pleasantly mild winter turns into a pleasantly hot spring, the Catalans throw street parties called ‘calçotadas’ and get together to indulge in traditional calçots. Native to Catalonia, these sweet little onions are something between a leek and a spring onion. They’re charred over open flames and served with a sweet romesco salsa, into which you dunk your calçots. While the BBQ is burning hot, the chefs will also thrown on a few hunks of meat, as well as traditional Catalan butifarra sausages for good measure. The cava (sparkling Catalan wine) flows freely and it doesn’t take long for la fiesta to take over.

Tip: Eating calçots is a fun but messy business so don’t be surprised if you are offered a bib to wear while you feast. All the locals happily wear them so don’t hesitate to put yours on too!

As Barcelona’s signature landmark, the Basílica de la Sagrada Familia is a must-visit at any time of year. But the intricate Nativity Facade is even more poignant during the Christmas season, as Gaudi designed it to tell the story of Christ’s birth, life and death. The crowds and lines are also way smaller during the winter months, so you don’t have to waste too much time waiting to get inside.

The cooler days of winter present the perfect excuse to treat yourself to traditional Spanish churros. These deep-fried, sugar-dusted delights are Spain’s answer to the donut and are even more devish when served with Spanish hot chocolate. It’s so thick that you can dunk your churros in it and they’ll stand up on their own. Forget about the diet for a moment – this is an important element of Spanish culture that you simply can’t miss!

Tip: Get that cozy feeling in Barcelona this winter with naughty-but-nice churros and devilishly thick hot chocolate. Two of the most classic spots in the old town include Granja M. Viader and Granja Dulcinea, where you can indulge in perfect churros and all sorts of sugary temptations. Xurreria El Trebol is open 24 hours over the weekend, serving the locals’ favourite post-fiesta treats.

For more delicious Barcelona bites this winter, join us for one of our fun food tours and we’ll make sure you eat and see the best of the best.

Where to Eat the Best Spanish Ham in Barcelona: From Bars to Shops and Delis

What to Eat in Barcelona During the Holidays

No spam, notifications only about new products, updates.
PrevPrevious20 Surprising Facts About Beautiful Barcelona
NextBarcelona Nightlife: An Insider’s Guide to the Trendiest Bars & RestaurantsNext
On Key 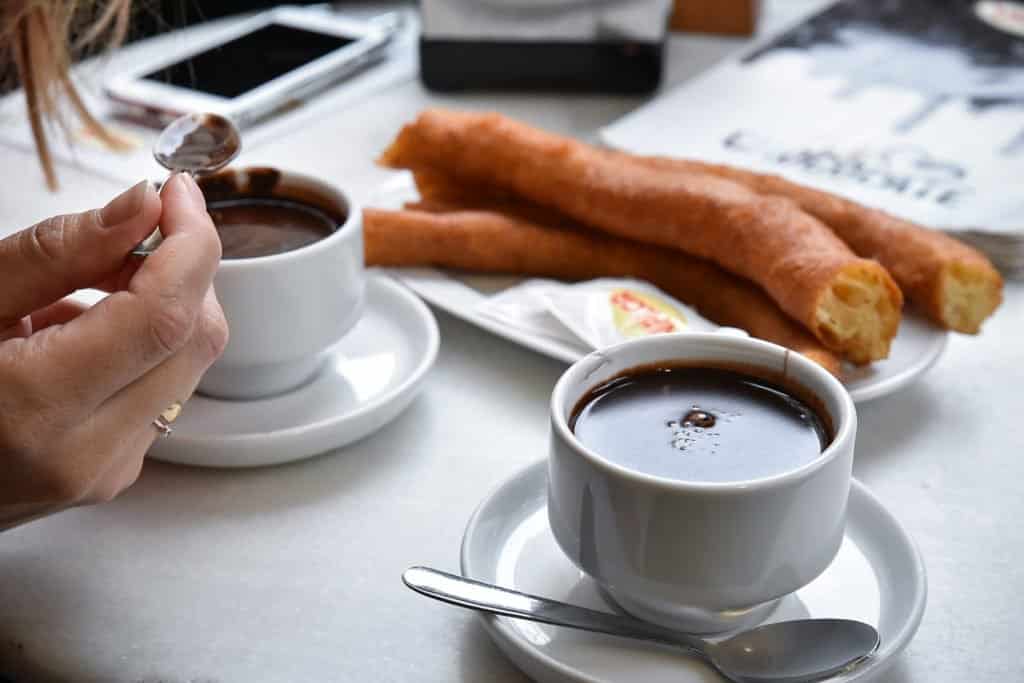